Some swam the six laps quickly, some struggled a bit, and some pulled themselves along on the lane ropes with a coach in the pool encouraging them. But every one of the kids finished the 150-yard swim at the YMCA pool, the final leg of the first annual Palisades Fourth of July youth triathlon. This was after the athletes completed a 5K bike ride starting and ending at the Palisades Recreation Center and a 1.1-mile run up to the Temescal Canyon pool.

“Every Finisher Is a Winner” said the red T-shirts worn by the entrants and volunteers in the triathlon. More than 60 kids (56 individual entrants and 3 relay teams), ages 5 to 15, entered the event and all of them finished in less than 50 minutes. From the first finisher to the last, the children were all cheered on, supported and encouraged every step of the way by parents, coaches, organizers and volunteers, many from the L.A. Triathlon Club.

The winners were Jose Lopez, who finished in 23:28 (after running the Palisades-Will Rogers 10K that morning), and Courtney Knapp, who completed the race in 25:29.

Knapp, 13, a student at Calvary Christian School, entered on a whim the day before the triathlon. “I’ve done 5Ks and a 10K, and I decided yesterday to do it,” she said. “I’m a junior lifeguard, and that helped me in swimming.” It was her first triathlon, but “I’ve done all the elements in different ways.”

Her favorite part was the running. “The hill on the bike part was pretty hard.”

Standing poolside after she completed the race, Knapp cheered the rest of the athletes as they finished their laps.

Lopez, also 13, is a member of the Cypress Exceeding Expectations Triathlon Club, a group of inner-city kids from San Bernardino that has been coached for two years by five-time Ironman world champion Cherie Gruenfeld. She brought 13 kids to participate.

Lopez will be entering eighth grade at Serrano Middle School in the fall. “I’ve done a lot of these,” he said. “But this one was the most fun because it was the shortest. We had to go to tryouts first and I made the team. But I did most of the training on my own.”

“I like the swimming part the best,” said Lopez, who plays basketball and soccer at school. “Sometimes it is the first thing you do, but here it was the last. I hope I can do this again next year.”

The Exceeding Expectations Triathlon Club was born after Gruenfeld was invited to speak at Cypress Elementary School in Highland in December 2000. “I used my Ironman experience to talk about setting goals and the kids responded enthusiastically.” In fact, 200 kids expressed interest in running triathlons, so tryouts were held. Starting with 12 kids, the group now has 40 kids who compete in triathlons and other races regularly. “It teaches them to set a goal–and to know it’s going to be tough, but to keep going until it’s finished. It gives them a positive direction and an opportunity to see another side of life.” Gruenfeld started picking kids up at 4 a.m. on race day. Some of the young people saw the ocean for the first time driving to the Palisades. 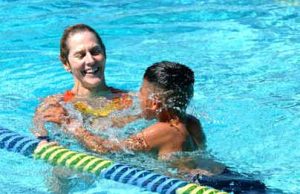 The group of at-risk youth, ages 8-14, are now seasoned athletes who ran either the Palisades 5K or 10K before participating in the triathlon. However, they don’t have anywhere to practice swimming. Gruenfeld hopped into the pool with some of the athletes, encouraging them as they pulled themselves along the ropes. Other coaches did the same with other young competitors as they headed for the finish line.

The triathlon was organized by Palisadian Deborah Hafford, herself an Ironman triathlete. It was co-sponsored by USA Youth Triathlon, of which Hafford is the founder and executive director, and the Palisades-Malibu YMCA. Amanda McPherson, a USA Triathlon-certified coach, worked with 25 young people who prepared for the race in an 8-week training program at the Y.

“I founded USA Youth Triathlon this year as a non-profit organization dedicated to giving children of all backgrounds and abilities access to this sport,” Hafford said. “Getting kids involved in sports and teaching them the benefits of physical fitness are vital to a child’s healthy development and self esteem. This event was the first effort in the development of this program.”

An athlete with triathlon in her blood was native Palisadian Lisa Weintraub, 12. This was the second triathlon for the Paul Revere student, who participated in the San Diego Triathlon two years ago.

Weintraub said she trained for the event with her family, primarily her father, Brian, who competed in Ironman competitions for over 20 years in Florida, Hawaii, California and Nice, France. “My dad and I rode the bike course together on weekends and I practiced swimming with him, too,” Weintraub said. “I thought the triathlon was really fun and I learned a lot. It was a really good experience.”

Savannah Schy, 8, a student at Village School, is a first-time triathlete and one of the participants in the training program. She was cheered on strongly from poolside at the finish and she overcame a bit of adversity at the start of the bike segment. “I got a bad start. My pedal got stuck and it was hard to go.”

Schy had learned about dealing with setbacks during the training program which met each Saturday afternoon for two hours. Two Saturdays ago, she recalled, “I was biking, I went over a speed bump and I fell, cut up my knee and chin.” She continued and placed second in the running race that day.

A special award was given out for best effort to Jasmine Neroes, 9, and best sportsmanship to 5-year-old Palisadian Joe Walker, the race’s youngest participant who was accompanied throughout the competition by his father.

About 15 children signed up the day of or the day before the race. In fact the race was so successful that Hafford said, “Next time, I’ll order more T-shirts.” She’d also like to place a race clock near the pool. The race clock was on a laptop and the time was then yelled out to the volunteers by the pool this year. But with all the yellers, screamers and cheerleaders standing around the pool, a race clock would make things easier.

Later in the day, 35 triathletes rode in the YMCA parade float.