( By MARK MUCKENFUSS
THE PRESS-ENTERPRISE )

Emilio Holguin wants to be an ironman.

The 12-year-old Serrano Middle School student has given himself six years to get ready. At 18, he plans to be swimming, cycling and running in Kona, Hawaii, in what many consider to be the world’s toughest triathlon.

It might be easy to dismiss Emilio’s goal as a fantastic adolescent’s dream. After all, he lives in a blighted area of San Bernardino where many kids can’t even afford a pair of running shoes, let alone a racing bike.

But Emilio is training under the eye of Cherie Gruenfeld, a Lake Arrowhead woman and veteran of 10 Hawaiian Ironman races, where she has won her age group division five times.

Evolution of a team

Gruenfeld is the coach of Cypress Exceeding Expectations. The team, which began with 12 eager athletes a little more than a year ago, has doubled in size. Volunteers run the program largely with donated equipment. They transport the kids from their homes to practices and events such as the YMCA Highland Run, which was held Sunday in Highland.

Mark Zaleski/The Press-Enterprise
Ironman competitor Cherie Grunfeld, on her bicycle, and her group of young athletes make their way around East Valley High School in Redlands. She has been helping them reach their goals in swimming, running and bicycling.

The team was featured during a brief profile of Gruenfeld that was part of NBC’s coverage of the Hawaiian Ironman competition in November. The program also is highlighted on the back of the latest Wheaties cereal box.

The team evolved out of one of those be-careful-what-you-wish-for situations. Greunfeld came to Cypress Elementary in December 2000 at the request of friend Jacque Irons, who teaches second grade. Irons wanted the children to hear about goal-setting and commitment and to see where those things might take them. Gruenfeld thought she was giving an hour or two of her time in hopes of inspiring a few kids.

She found herself impressed with the response.

“The kids were so excited and asked such good questions,” Gruenfeld said. “There was this little triathlon coming up and I said I would help any of them that wanted to do this.”

The school held tryouts and 12 students were chosen to be on the team. None of them knew how to swim and only a couple of them had bicycles, none of which were racing bikes.

Besides being surprised by the interest of the students, Gruenfeld soon began to realize that the commitment that lay ahead of her was more than she anticipated.

“I had no clue that these kids were so on their own,” she said. “I envisioned the parents bringing them somewhere to train on the weekends.”

She found out that if the kids were going to get anywhere, most were going to have to be picked up and dropped off at their doorsteps. On a recent Saturday morning it took an hour just to shuttle the kids and their bikes to Redlands East Valley High School for a training session. At morning events, Gruenfeld and other volunteers bring food so the young athletes get breakfast before they set out.

Finding money for event entry fees and transportation costs also presented a challenge. But bikes were donated by the Redlands Bike Club, Inland Inferno Triathlon Club and individuals. Some race organizers have waived registration fees for the team. And donations have come in, including recent grants of $1,000 from TRW and $2,500 from General Mills. Bags of donated athletic clothes regularly show up at the school.

Gruenfeld has a core of four volunteers and calls in others when she can.

“There’s no way I could do this without these (volunteers), and I beg my triathlete friends to help me out with this.”

On a recent day, four additional volunteers showed up. The team was taking a practice run at a course it will compete on in a few weeks. With the team gathered before her, Gruenfeld explained the day’s training. A two-mile run, followed by a 10-mile bike ride. Finally, they’ll jump in the pool and do some swimming.

“After the run, the first thing you do, before you even touch your bike, is what?” she asks.

“Get your helmet on,” the kids chorus.

“You absolutely must stop at every corner,” she tells them. “If there’s a car there and it does the wrong thing, even if you’re right, who’s going to win? The car, right?” 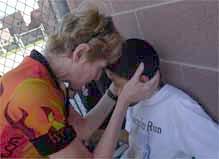 Ralph Holguin, Emilio’s father, was elected team mechanic early on and says he’s happy to help out as much as he can. Very few parents attend the practices or the races, but Ralph and his wife Jeanetta Bolton are almost always on hand.

Their son’s success has rubbed off. Ralph Jr., 16, now is training and competing in the weekend events. He also is helping to train first-, second- and third-grade students at Cypress who want one day to be team members. And his cousin, who lives with the family, also has begun competing.

Bolton says she credits Emilio’s involvement with the team for much of his scholastic improvement in the past year. While he used to get C’s and D’s in class, Bolton says Emilio now comes home with A’s and B’s.

“He’s more motivated,” she said. “He’s into school more and his concentration is better.

“He wants to be like Cherie and do that Ironman,” she said. “I said I was going to stay behind him 100 percent.”

Cindy Haigler, a tutor at Cypress, said Emilio is not the only one whose success on the triathlon course has lapped over into his academic performance. She pointed out three other boys who have benefited.

“Their self-esteem is so high,” she said. Where before they were average students, now “they’re leaders in their classrooms. They think they’re little rock stars. It’s fun.”

Haigler is happy to see the students caught up in something she sees as significant.

“It gives them a lot of incentive and something to work toward,” she said. “I think it means a lot for their future. The ones that take advantage of that, it can change their lives.”

‘It’s been a miracle’

Irons said that when she invited Gruenfeld to speak at the school, that very hope was at the back of her mind.

“I’ve always wanted to find something to change this community,” she said, adding that she has tried other things in the past. “But this is it. It’s been a miracle to watch it take off like it has. I thought we’d have four or five kids, but it’s been incredible.”

She pointed to Emilio’s family as an ideal.

“That’s what the whole story’s about,” she said. “Now the family is connecting with their kids. Everybody’s thinking in another direction.”

Steven Martinez, 12, said he had never even heard of the Ironman race before he heard Gruenfeld speak.

“I thought that it was cool doing all those things,” he said. And he thought he could do them, too.

He recently had one of his best performances in Hemet’s Tinsel Triathlon.

“I got second place,” he said.

“First in your age group,” Gruenfeld reminded him.

That feeling of pride, Gruenfeld said, is what she hopes to give her athletes.

“These kids need an opportunity,” she said. “They wouldn’t have this without somebody, not necessarily me, but somebody helping them.”

Her goal is “to give as many kids as we can manage the opportunity to race,” she said. “Every time they go to a race, they see a world they didn’t know existed. When they get to the finish line, they’ve accomplished something. Every time they get that, I think they get the idea there’s more in life that they can do than they realized.”