Running for Their Lives

Running for Their Lives

( By MARK MUCKENFUSS
THE PRESS-ENTERPRISE )

Cherie Gruenfeld has been racing against the clock for many of her 61 years.

In the water, on a bike, on the pavement, Gruenfeld — a six-time winner of the Ironman World Championships in her age group – is used to snatching away seconds as she chases her dreams.

Six years ago, she started battling a different kind of clock, the one that ticks off the quarters and semesters that lead to high school graduation.

Gruenfeld, of Palm Desert, inserted herself into the lives of some fifth- and sixth-graders at San Bernardino’s Cypress Elementary School, offering them the chance to train and compete in age-group triathlons. She founded a program called Exceeding Expectations, providing equipment, training and even transportation for the students. Starting with 12 children, Gruenfeld now has a team of 30.

But it’s not quite what she envisioned.

She quickly found the needs of the mostly at-risk kids who joined the small team went far beyond a new pair of running shoes and a ridable bike. Many of them can barely swim and struggle through that leg of the race. They struggle even more, she says, in their day-to-day lives. 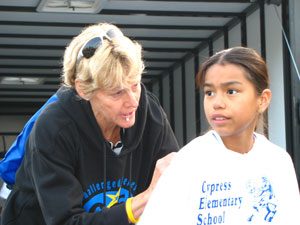 Many students came from families who did not place a high priority on education, Gruenfeld says, and they lived in an economically depressed area of east San Bernardino, in neighborhoods where it was often unsafe to be out on the streets.

“I’m not comfortable with them out running or biking on their own,” she says.

Instead of trying to turn them into super athletes, such as herself, she decided she could use sport to spur success in the classroom and other areas of their lives. As she did, her focus began to shift. The kids she had taken on as a side project wiggled their way into her life and became like a family to her.

It used to be that she fit the Exceeding Expectations program around her personal training schedule. Now, she says, it’s the other way around.

Though she has no kids of her own, Gruenfeld says if she did, “I doubt I could love my own kids much more than I love these kids. They are the top priority now. This is my passion.”

The program got started almost on a dare. Gruenfeld had been invited to speak at Cypress by teacher Jacque Irons, who now is a program volunteer. After lecturing to the students about goal-setting, Gruenfeld offered to help prepare those that wanted to participate for an upcoming triathlon. She was shocked when 200 hands went up. Through tryouts, 12 students were picked.

Three of those kids are still on the team. Gruenfeld estimates that 60-65 youngsters have been involved in the program.

On a recent race morning, the alarm at Gruenfeld’s Palm Desert home went off at 3:45. She and her husband, Lee, along with a handful of parents and volunteers, arrived in Loma Linda at 6 a.m. with an equipment trailer and a group of sleepy kids ranging in age from 10 to 18. Most of the kids had to be picked up at their homes.

Bike tires were filled with air, helmets fitted and jersey numbers pinned on as the youngsters stretched and readied for the 5k run, 9-mile bike ride and 150-yard swim that made up the PossAbilities Triathlon. The Loma Linda University sponsored event is designed for disabled and able-bodied athletes.

This is just one of many triathlons of varying lengths that Gruenfeld’s crew will compete in during the year. The high point, she says, is the upcoming Tin Man Triathlon in San Bernardino on June 25.

Amy Kowalski, 32, of Yucaipa, teaches school in Colton and volunteers for Gruenfeld’s program. She calls Gruenfeld an inspiration and doesn’t mind falling out of bed pre-dawn on a Saturday in order to get kids to the starting line.

On this morning, she had picked up a kid who had never run more than a few hundred yards at a time before joining the team. Starting with 5K races, he worked his way up and recently completed a half marathon. He was wondering, she says, how far he could go.

The sense of success the team members get from pushing themselves to new levels, she says, is critical in their lives.

“Once you’ve felt that,” she says, “you can accomplish anything.”

Team member Nick Keller, 15, recently moved from Highland to Moreno Valley, but has stayed with the program he credits with his success in school.

“I lived a troubled childhood in a bad area,” Keller said. Being in Exceeding Expectations “showed me there are nice people out in the world. I met a lot of nice people that gave me many opportunities.”

As a sixth-grader, Nick says, “I never did my work. I was a back talker. I was suspended multiple times for yelling at the teacher and ditching school. When I got on the team, I don’t remember why, but I started doing my work and started improving.”

Ending his sophomore year, Keller says he is getting straight A’s in school. Gruenfeld, he says, checks on his progress every month.

“Cherie makes sure we have good grades,” says Mike Arbor, 16, of Highland. “If not, she works with us.”

Sometimes she gets through to the kids. Sometimes not. For every team member that makes it to a race, there are others who have fallen out of the program.

“I now understand that working with these kinds of kids, there’s going to be lots of disappointments,” she says.

She was heartbroken last summer when one of her girls, age 15, told her she was pregnant. Not long after, a boy on the team told her his girlfriend was going to have a baby.

“But they’re both here today,” she said, watching kids come in at the end of the bike leg of the race, “and they’re both in school. So I call those successes.”

In fact, she points to the boy in question, Jose Orozco, as one of the stars of the program. Three years ago, on the way to a race, the boy stunned her, she says, by questioning the value of a high school diploma.

“He said, ‘Why would I graduate from high school?’ Nobody in his world did that,” Gruenfeld says. She helped convince him to stay in school.

“When, two years later, he graduated, it was a pretty exciting moment for all of us,” she said.

Fighting off the fatigue of being up much of the night with his five-week-old daughter, Orozco, 18, says being on the triathlon team has made the difference for him.

When Orozco graduated last year, Gruenfeld wasn’t done with him.

“She told me to go to college,” he says. “She told me she would help me at school and pay for my books.”

The money for such assistance comes from corporate and private donors and Gruenfeld herself. Exceeding Expectations has an annual budget of about $25,000, Gruenfeld said.

“If I had more funds, it would translate to more time,” she said. “I could pay for some training. I feel bad about the situations I put them into with as little training as we do. Right now, they are racing and that’s it.”

But it’s the kids like Orozco that keep her committed.

“What keeps me enthused about it is any little thing the kids do,” Gruenfeld said. “A kid will call me and ask for help or I hear good news about some kid. It’s tiny little things.”

There also are big reasons that keep her going.

“It’s knowing that if somebody does not intervene in their lives, these kids simply don’t have a chance,” she said. Many of them, she adds, will never reach their goals, even with the help of the program.

“I believe my presence gives them some kind of a chance.”